For the longest time, computer speeds have increased while prices have decreased. This holds true for components such as CPU processing power and Random Access Memory (RAM). For disk drives however, data access speeds have been limited due to the mechanical nature of the drives. This limit affects how long it takes to boot up a computer, open programs, and transfer files.

Historically, desktop and laptop computers have used mechanical hard disk drives (HDDs). These drives have a spinning magnetic platter and an arm with read/write heads that determine north or south magnetic poles to thus represent digital 1s or 0s (what is known as binary – two numbers). HDDs are rated based on disk platter speeds which are typically 5400, 7200, or 10,000 RMPs. Various standards have evolved to connect theses drives to computer systems with the Serial Advanced Technology Attachment (SATA) being the current standard.  With the SATA interface, drives are connected with a data cable to the motherboard, and a separate cable connected to the power supply. The data transfer rate, currently limited to around 100 Megabytes per second (100MB/s) has not increased dramatically due to the speed limitations of the spinning disks. Mechanical hard disk drives usually have the lowest cost per Gigabyte* compared to other storage technologies.

Another type of data storage that has gained recent popularity is called a Solid State Drive (SSD). Solid State Drives are like their name says: solid, meaning they have no moving parts. Instead, SSDs use hundreds of thousands of tiny electronic transistors. Transistors are semi-conductors that have a unique ability to change state between either on or off, thus representing a digital 1 or 0.

SSDs are much faster than mechanical drives. What’s more, they use the same SATA connectors as mechanical drives making them fully compatible. The industry has seen recent price drops in SSDs and an increase in storage capacities, therefore SSDs have become the mainstay for many new systems. Likewise, they make one of the best budget friendly computer upgrades for existing desktop and laptop computers.

The SATA connections for both HDDs and SSDs however are limited in speed to 6 Gigabits per second (6 Gb/s) or 750 Megabytes per second (750 MB/s), which is actually slower than what SSDs can perform at.

To solve the problem of having a fast SSD that connects to the relatively slower SATA interface, the industry has adopted a newer standard called Non Volatile Memory express (NVMe). NVMe is an interface for SSDs to connect directly to a slot on a computer’s Motherboard via a PCI express connection.

Just a few years ago, NVMe drives were mostly popular with higher end systems, however recent manufacturer adoption of these drives and competitive pricing now makes them available today in even entry level systems. Dell for example, is listing their entry level Insprion 15 3000 laptop for $245 including a 128 GB NVMe drive. 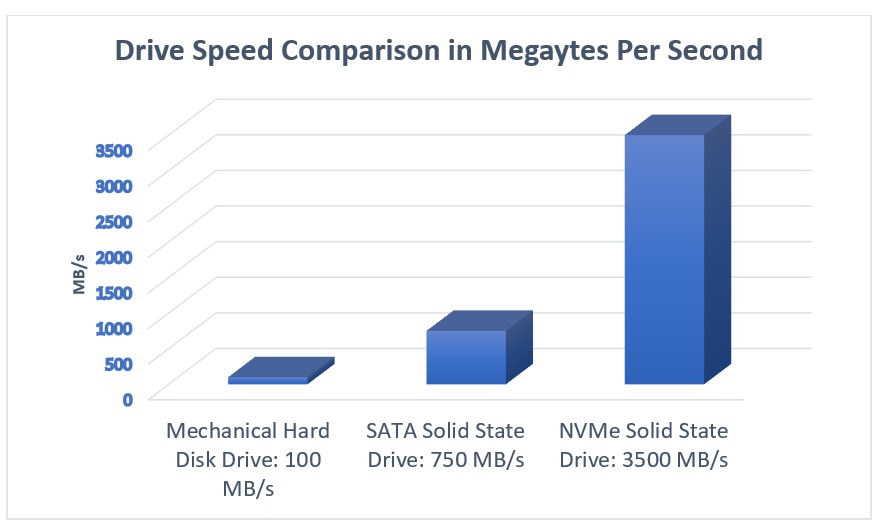 The future of NVMe SSDs looks promising with faster speeds on the horizon. Kingston, a popular SSD manufacturer announced in January of this year that it is looking at speeds of 7000 MB/s for its next generation NVMe drives.

NVMe and SATA solid state drives do have an important limitation to consider compared with mechanical drives and that is a limited number of read / write operations before they are no longer able to store data. Due to the nature of electronic storage, solid state drives simply wear out after many read / write operations.  Current trends show SSDs are working longer than originally expected and manufacturers like Samsung are listing a 10-year life span.  Still for long term storage, some IT administrators may be more comfortable storing data on mechanical drives. Naturally, mechanical hard drives can fail as well so a good backup plan should always be a part of any data storage plan.

* The price of solid state drives is dropping steadily and they may soon be cheaper than mechanical hard disk drives. As of this writing, a 1TB SSD costs about twice as much as a 1TB HDD.

Is a Career as an IT Professional Right for You?

If you’re feeling ready to take on exciting challenges, earn a better income, and be more valued and respected at work, train with us and you’ll have the support you need while you develop the knowledge to:

Learn more about our Information Technologies Systems Management program and explore whether Laurus is right for you!